Some time 2 months ago, a random invitation for a *late* summer vacation was raised with my thesis classmates ft. Jaysel and her BF, Lorenz. After finally deciding in pushing through El Nido instead of Sorsogon, we gathered up all the information we can to make it the best *late* summer outing we’ll have. And my friend Gian, being the most excited one lead how our tour will go.

Our trip was scheduled July 14-18, 2016 bound for El Nido, Palawan through Puerto Princesa Airport. We booked through Cebu Pacific at P3,360 RT.

Weeks before our scheduled vacation, we researched and contacted several hotels that can accommodate us. That until I suggested SPIN Hostel El Nido who just opened last year. We were in awe of their photos and rates.

Through Agoda, we booked ourselves online amounting to P1,358 per bed, per person, for 2 nights (booking through their site is more expensive). Per bed, because we got ourselves in their dormitory type room instead of private rooms for cheaper costs. So chances are, you will be in a room with someone you don’t know if you’re only booking yourself or with only a few friends throguh their dorm rooms.

We met up in McDonald’s MRT Taft station at 2pm for our airport loop bus ride to the NAIA terminal 3 amounting to P20 per ride. Pretty expensive, but extra convenient. 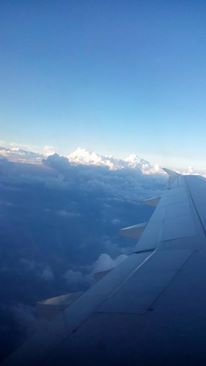 It was actually my first time in NAIA (or any other airport for that matter) so everything was amusing for me. Little did I know that NAIA is actually one of the worst airports in the world.

Our flight was scheduled at 5:10pm. After checking ourselves in, it was in no time that we were lining up to finally board the plane.

It was Jaysel and I’s first time to ride an airplane so our friends were enthusiastic on how we would react on our first flight ever. Armen was kind enough to give up his window seat to fill in my excitement for the event. Haha.

Much needed airport selfie: L-R: Jaysel, Jed, Gian, Yon, Armen and me. Lorenz isn’t on the photo since he’s sitting in the back of our row 😦 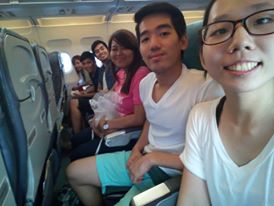 The flight was amusing for me although before our arrival, my ears were aching from the insides (what do you even call that moment lol) After around an hour and a half, we reached Puerto Princesa’s airport.

It was a good thing my brother’s former officemate has a relative in Puerto Princesa, who by coincidence drives vans for rental. So we were at ease with our soon-to-be 6-hour ride to the paradise of El Nido knowing our van driver is someone we know.

Tito Fred was very kind during the whole duration of our trip. You may also book him for your tour through 0948-986-8759.

Our ride was a 12-seater Urvan and rental is at P12,000 round trip from Puerto Princesa to El Nido, inclusive of sidetrips to our dinner, breakfast and souvenir shopping locations. Though exclusive of a P100/van entrance fee to El Nido. We went for a private van ride instead of public transport since the public van transport system ends at around 5:30, but going for the public transport is cheaper at P500 per trip, unlike ours which costed P857 per trip since we were only dividing the van fare to 7 instead of 12.

Before our land trip to El Nido, we decided to stop by anywhere for dinner because we were all hungry. Tito Fred brought us to Ugong Rock Grill & Seafood Bar which was situated in the main road to the airport. 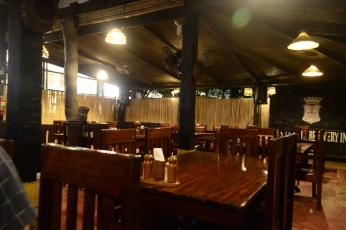 Place is a little dim to take proper food photos and we were all pretty hungry since the food arrived around 30 mins after we ordered. PS. Try out their Arorosep/Lato salad (seaweeds).

At 9:30 we were all buckled up for our land trip to El Nido. I have issues with sleeping in vehicles (and anywhere that isn’t my bed actually) so I wasn’t able to sleep well. Around 11:30, we had a short our stopover for restroom break. We all had cup noodles during this time.

Going back to the van, I was hearing Tito Fred constantly opening up candies to battle his sleepiness, later on did I asked if we were anywhere near El Nido, to which he replied we were an hour away. He also requested me to stay up so he has someone to talk to.

The roads are dark with zero streetlights and a lot of stray dogs crossing the street. The only way to see where we were going was through the car’s headlight. It was pretty foggy. Most of the time, we were following the painted road as it was the only means of seeing what lies ahead. The second half of our trip after the midway stop was pretty bumpy despite being cemented.  Thus, it was even harder to sleep for all of us.

Tito Fred shared some histories to me while the others were sleeping. I admit I was pretty bummed with the idea of having to talk to him till we arrive to ease his drowsiness, but I rather do that sacrifice than to see ourselves waking up from a cliff dive of sort.

When we arrived at El Nido, we had to pay a P100 entrance fee for the van to enter. This one is excluded from the P12,000 rates. Tito Fred was kind enough to let us sleep in the van for the duration because it was 3 in the morning and most if not all establishments are closed during the time. So we stopped by one of the hotel’s empty parking spot and continued our sleep for a good 2 hours before it was time for us to head to our hotel. That was the only time I was able to rest properly since our arrival.

Around 5:30, we headed to SPIN Hostel and they were nice enough to accommodate us in their common area even if our check-in time wasn’t until 12nn that day.

I knew that was a clear sign of the wondrous activities awaiting our stay in El Nido.