Day 1 wasn’t enough to toast us nor tell us our trip was over. In fact, it was only the start. Day 2 had a lot more to offer for our El Nido getaway.

My friends decided to come up with a random ‘best plating contest.’ Since our breakfast was buffet type, the food we had were pretty flexible. While they were busy setting up their plates, meanwhile, I was busy eating my omelette and bread and sipping my coffee. Hahaha. Screw the best plating award. I’m gonna eat.

Like usual, we booked ourselves at the front desk and we were fetched again by someone from SPIN’s chosen tour partner. However, we walked instead of the tricycle ride which was no problem anyway.

At first, we wanted to push our agenda in Tour B since we really wanted to visit Snake Island. Tour B wasn’t as popular as A or  C either. But later on, we dismissed the idea when ate Yon small talked one of the crew and told her that there wasn’t anything worth seeing in tour B.

It costs 4500 for two, and 800 for every succeeding person. Thus, making us pay P1214 each inclusive of our boat, life vests, licensed tour guide, snorkeling gears, towels, lunch and drinks.

It was nice too to have the same tour guide, kuya Milan during our trip. He’s very nice, helpful, and he makes the best food plating  😀 Please do book him too when you go to El Nido. You may contact him at 0950-329-9954.

Helicopter Island is called such since it’s shaped like a helicopter. But personally I see a fried chicken leg instead.

Most of what my friends did was snorkeling, but I’m pretty afraid of the water so I just enjoyed dipping and later on staying under a shade of a tree. I really appreciate Gian’s effort on the attempt of teaching me how to snorkel but the water just felt too overwhelming for me. I didn’t want to spoil any of his fun.

Soon after came our next stop, the Secret Beach (which really isn’t so secret any more.) It’s probably called such as there is a need to go for a short swim and pass by a gap in the mountain to get to a… secret beach. (Although the beach is also accessible if the boat decides to go around the mountain too lol)

There wasn’t much to do in the place because the water was prety shallow and there were many people in the area. But we did have our share of photos as memories. 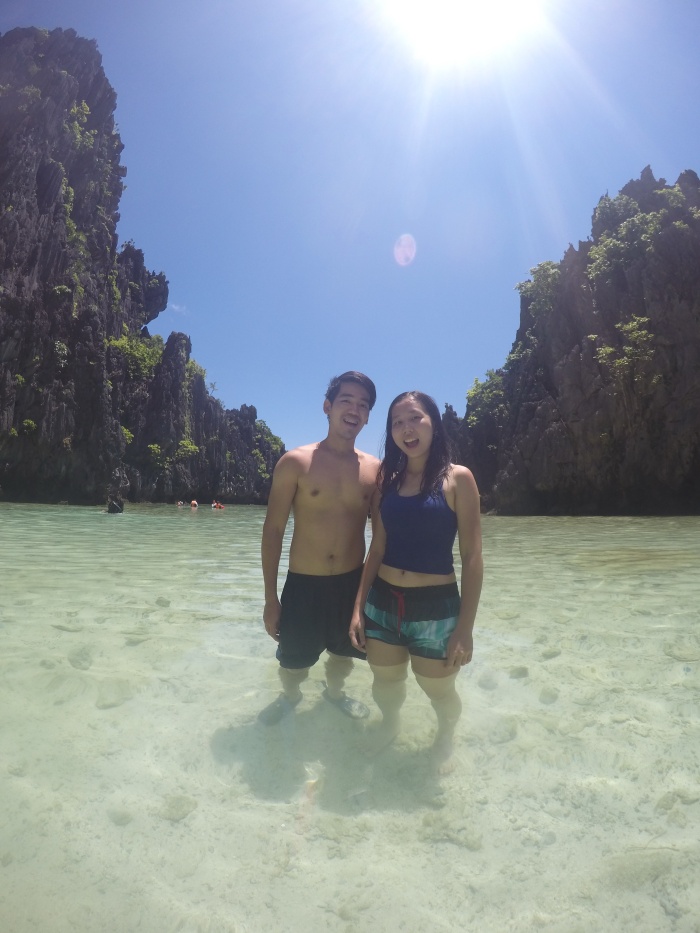 Armen and I | Photo by Lorenz 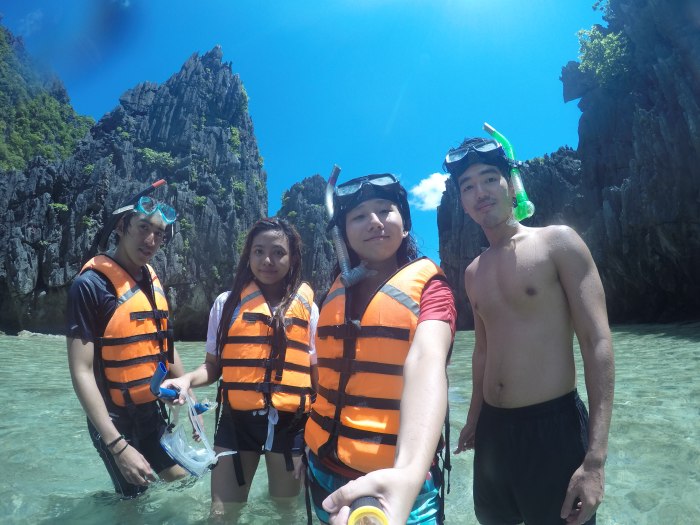 Photo by Lorenz.. I think

Our third stop was our lunch area in Talisay Beach.

Sad to say, when Gian was alighting the boat, his bag fell in the salt water, dipping his camera and mobile in it) 😦 We can clearly see Gian’s sadness during the time, especially since ate Yon had a similar experience and her gadgets weren’t saved afterwards…

Anyhow, here’s a photo of Armen in Talisay Beach while he hasn’t uploaded ours yet LOL

Like usual, our boat companies prepared our food in the boat while we we re busy having fun. The menu now includes rice, pork liempo, mussels, ensaladang talong, a plate of pipino, crab (!!!), pineapple slices, ripe mangoes, a 1.5L Coke and a 5 gallon drinking water. And wee were all mostly finish with our lunches when the sun finally shaded our location better lol.

Here’s a photo of us before lunch, and Gian’s things under the sun to evaporate the salt water out :<

Our next stop was the Hidden Beach. And we had to swim on waters. I was very thankful for the life vests and kuya Milan who was very helpful. He constantly says “akong bahala sayo, wag ka mag-alala” to me. He pulled me into the hidden beach because I had no idea how to get there being a non-swimmer and someone who fears the water a lot.

Sadly, probably during the time, I lost my eyeglasses.  While we’re n the Hidden Beach, I tried my best to be optimistic hoping I inserted it in my bag instead. 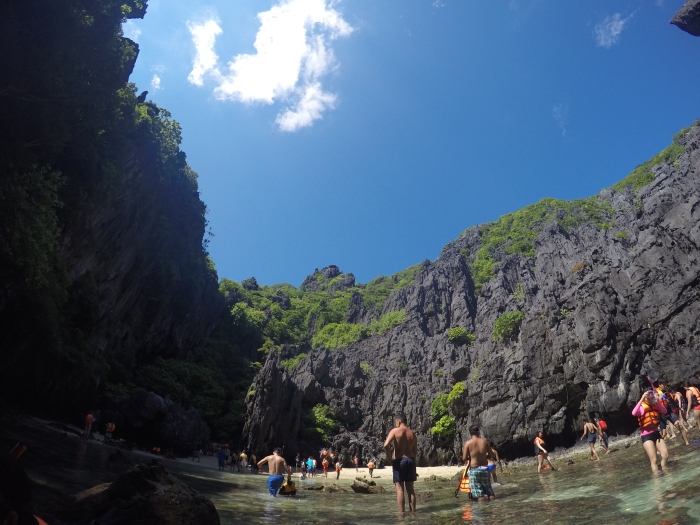 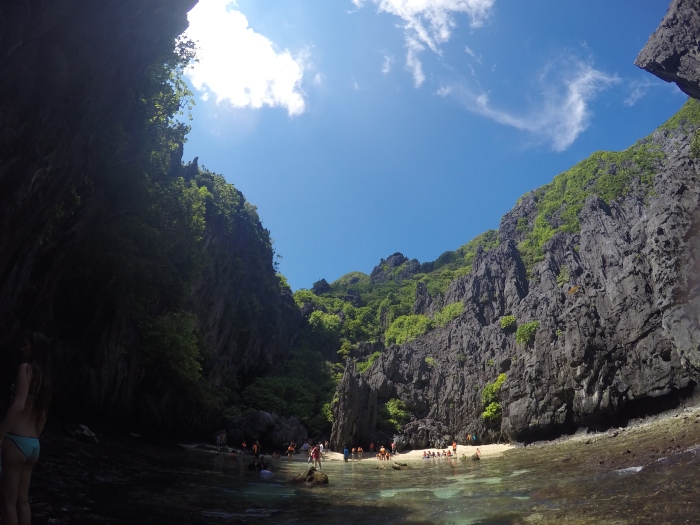 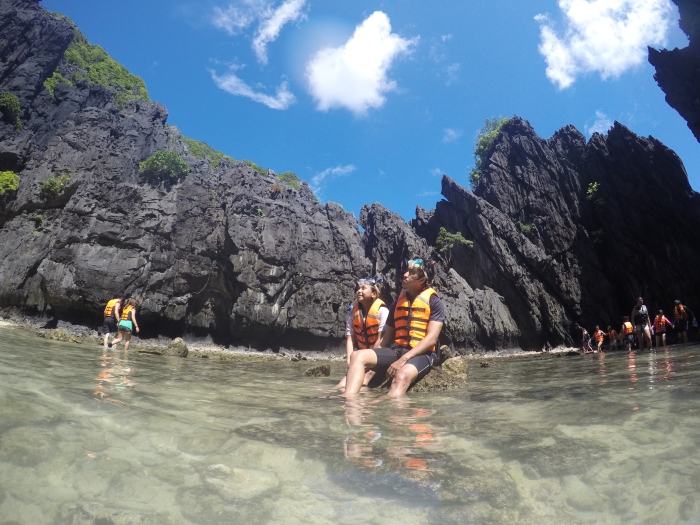 Going back, I immediately checked my bag and my glasses were nowhere to be found 😦 How could it be not my P50 shades instead!! After telling kuya Milan, he and the boat driver (or whatever you call it) dived into the waters to try and look for it. Sadly, still, it wasn’t found. I had to accept the fact that from there on, I’ll be more or less blind.

The view is AMAZING!

And it doesn’t stop there becauseeee looook. It’s a spectacular panorama  view and probably my favorite place we visited.

Here’s Armen too being all photographyyy 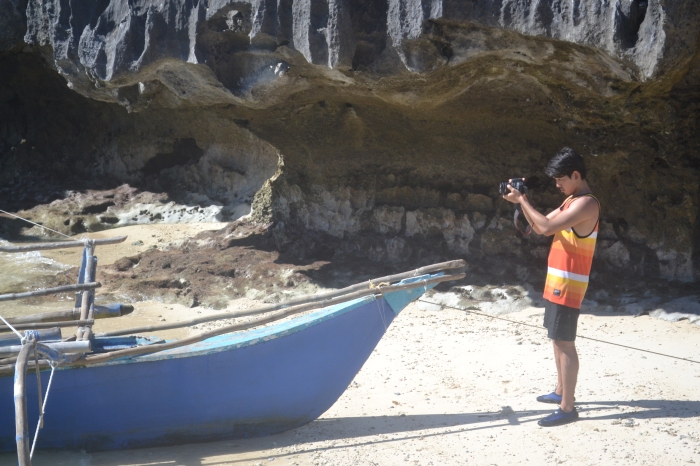 And the very necessary group jumpshot. (Don’t ask how many shots it took to get this.)

We had to be bound for El Nido Town Proper again shortly after that. We were all looking forward to BBQ Night Saturdays held at our hotel, SPIN Hostel every Saturday evenings. It costs P170/plate which includes a rice, a choice of grilled pork or fish, and dessert.

They invited a live band/ singer too and the playlist was amazing despite the singer making an attempt to make it an original. 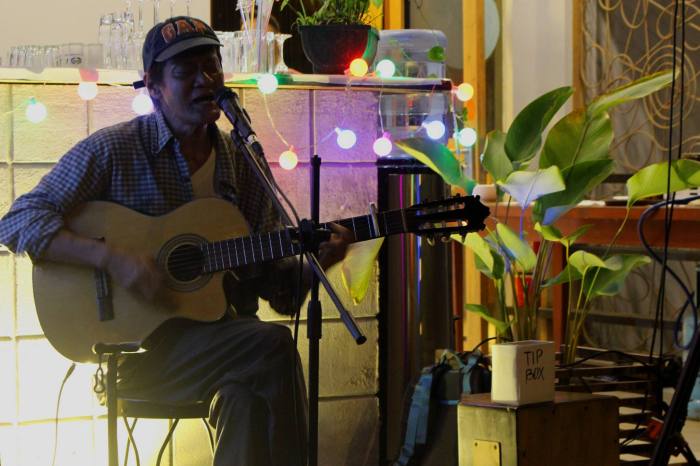 Here is a photo of the BBQ Night venue, The Deck in SPIN Hostel featuring other guests.

And the actual preparation of food:

To be honest.. and to my disappointment too, the food we had during the tours were much more delicious. 😦 Or I was expecting too much. But really.. lol.

BBQ Night ended fast, and we went back to our rooms to play more Exploding Kittens. Around 9:30, we called it a night and head back to our own beds for some rest. I officially called it a day around 10:45.