It’s been over a month since classes ended. I was not able to contain my feelings, too excited for the Commencement Exercise day to come. What to wear, what to expect, who to see, wondering if there’ll be crying, all these emotions contained in a single box somewhere in me.

My dad and bro filed their LOAs. They were mine for that day. I was touched because they did that.

A week before the actual day, it was as if the box I kept just went missing, I was left with none. But April 21 in Philippine International Convention Center,  still have to come. I just wanted to get over that day and move on.

I had no time to fix myself. With a 7am call time and an hour to get there, I had to wake up around 4:30 so I won’t have to rush. Good thing I did, because my stomach decided it was the right time to have LBM. Of course, What is graduation without a lot of selfies and groupies? 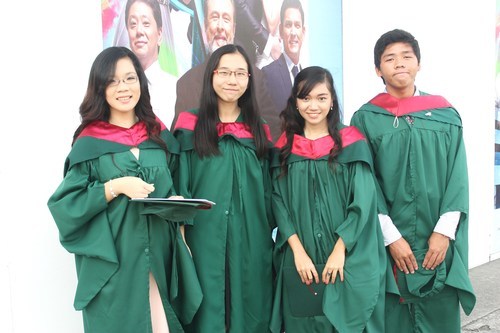 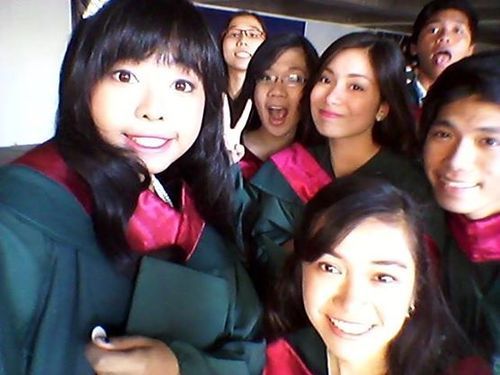 and of course, this time came. My name was called. I had to be careful since I didn’t want to be part of FEU history being the girl who tripped onstage and humiliated herself to the whole Tamaraw community.

It was hell of a wait before the whole exercise finished. Since we were the first ones to come up stage, our institute was done around 9:30 and had to have our butts calmed down since we still had 2 and a half hour to finish. There were so many of the other institutes that most of everyone (even parents) were already sleeping. XD

When the last person from the last institute, IABF, was finished, around 11am, everyone clapped their hands only to find out that there would still be people who would still “enlighten” us to what we are about to face in the real world.

Another guest speaker, Architect Rosario Encarnacion Tan, if I remember correctly, sorry for being lazy to check the program. She was a great speaker. I don’t know if it was just coincidence the thing about her love story being part of her success, but either way, it was a nice way to catch our attention.

“Watch out for heart aches because it might lead you to a bliss.”

Sadly, I only had a few photos with friends and family since we had to leave immediately because my bro and sis were waiting in MOA. 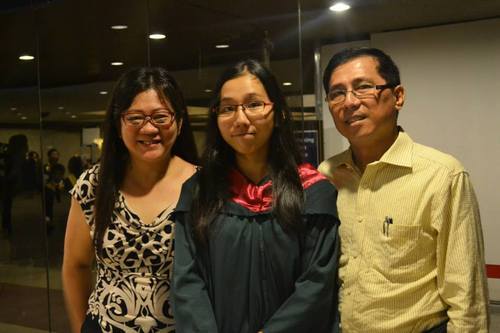 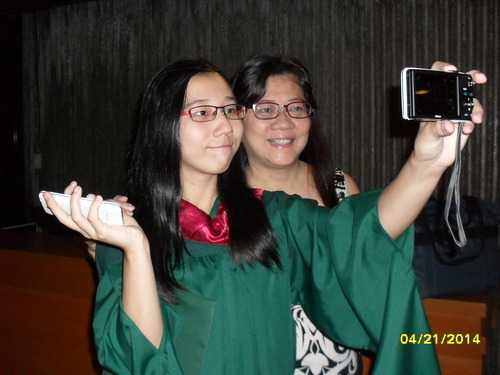 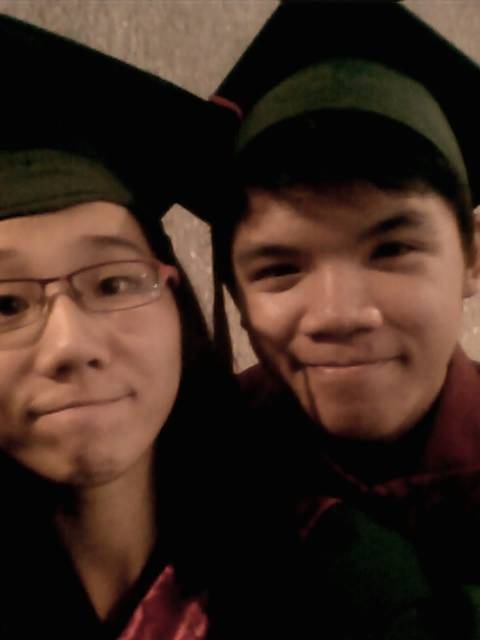 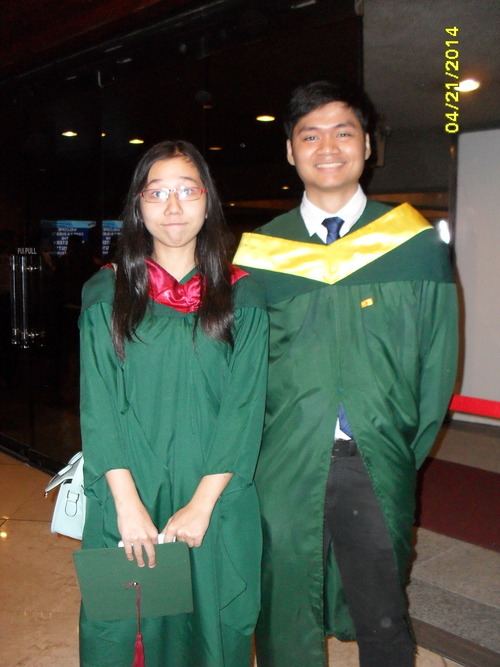 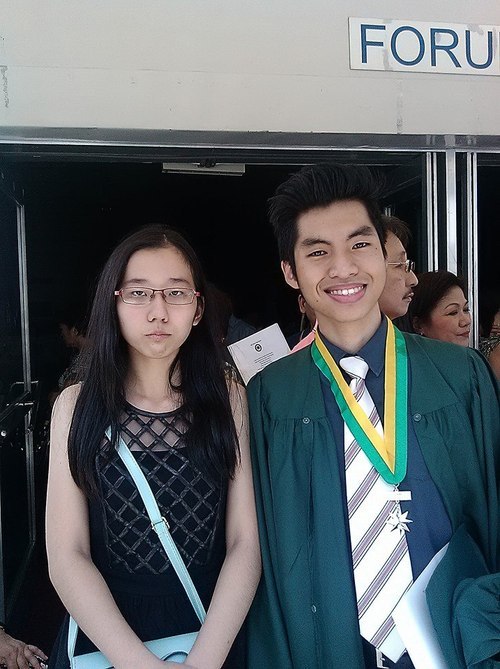 We then went to the car to supposedly fetch my siblings to go somewhere else, but we decided to have lunch there instead.

Being a sucker for pastas and pizzas, instead of looking for Ravioli which where I really wanted, we settled for Italianni’s since that was where we were waiting for my dad when he parked the car. 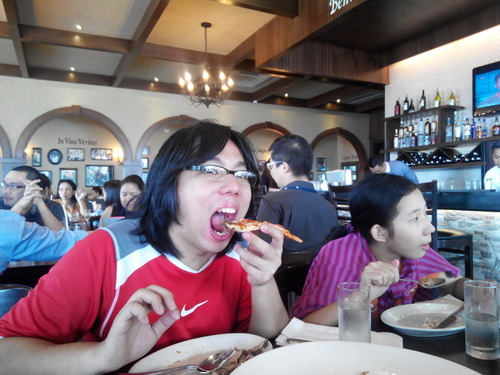 Little did I know that it was the start of my day changing from bliss, to laments.

It was honestly because of the shallowest reason. My mom being insensitive and unreasonable that I had not tolerated, I started to cry. My only question was, why can’t she be the least bit proper, she didn’t even excuses my graduation day to piss me off. Don’t get me wrong, we’re always fighting like this, but at least she could have spared that day for me to be happy. It was my day after all. I had this day as an excuse for us to be together even if it’s just a short and pretend one. I wanted myself to feel like I have a complete family even if I know it didn’t existed..

They were not able to talk to me properly since. My mom apologized, the ang-arte-mo-tumigil-ka-na-nga kind of apology. I just felt so much irritation on how they didn’t even tried to make me happy by not making me annoyed that day. I stared blankly and stayed at the back of them all along. They offered me DQ ice cream since they know that I always love sugary sweets and I can’t resist it, but I did. I had to. I had so much feels in me.

My mom being insensitive she was then offered for us to go to the department store. I immediately said they go on ahead and I’ll just stay there for them to enjoy themselves at the very least. They left.

I stared on the floor with my handkerchief on my face, and tears just went on rolling down my cheeks even if I tried to be okay. I was like that for 15 minutes. My dad then came back and tried to invite me to go with them. He went on slight sermon mode which I really didn’t appreciate. I was not reacting so he gave up in a short time, he was tired. he was sleeping, resting on his hand, he had his head fall a few times. I felt really bad. But it wasn’t enough to have me be okay.

He asked me again for another two times, till he left me with a sermon I had least expected from him. Telling me he and my brother had to absent and wasted (insert amount here) for the day just for my grad, and yet I was like that. I felt hurt. I blurted out, “edi sana hindi na lang kayo nag-leave! Lahat na lang kayo sinusumbatan ako.” then walked out with tears bursting out. I had to walk, walk fast, away from all of that, away from hurting. I hurriedly went to the ladies’ room to ‘fix’ myself and regain proper etiquette. Walked away, I didn’t know where my feet led me. I stayed near the playground for kids, still in deep tears. A part of me wishing a cute guy would ask “Miss, okay ka lang?”, just like in movies, then a love story would commence. LOL. I stil had that mindset even though I was falling apart.

My dad called, but I declined. He texted and apologized that he didn’t meant that in a bad tone. I told him what I felt, that I just wanted us to be complete, for once, even just a fake family celebration. He offered to get me home, and I told him I’ll go home by myself.

I cried and cried, moving on from one location to another to avoid them finding me. Soon I texted two good friends, Armen and kuya Ralph, asked where they were. Kuya Ralph was in his house, so far away from where I was. And I was really hoping Armen was just around the area. He said he was on his way home from his OJT. I told him to come over in MOA, in which he willingly agreed to. I waited for him and soon after he arrived, he immediately asked what happened. Some best friend. Knows when I’m sad even if I didn’t tell him anything before he asked.

Later on my dad texted again, asked if I wanted to talk about it. I wasn’t ready. I told him I had a friend over. He told me he’ll wait for me to get home, I didn’t know what time I’ll get home, I still needed to cry. I wasn’t ready to talk.

So I was crying and telling the story to Armen. We then went eating since he was looking for food and I was looking for a relief from all of it. Thus, crepe time. We talked about all sorts of stuff, till I felt I was already okay. After a few rounds around the mall talking about all sorts of randomness, we went sea side for a while before coming home. Thus, this very unnecessary panoramic shot.

He went to Buendia for me. Got me to the LRT before he went the long way home. I am very glad to have a best friend like him.

On the way, I was thinking what to expect home. What do I say, should I say anything? What should I do?

But when I reached our house, my dad wasn’t there. Everyone, not talking, I had myself alone in the room that night, my eyes still swelling.

Fast forward, last night, April 24, my dad went home. We’re still not in good terms. He doesn’t go home during Thursdays, and on Thursdays my mom is not home.  I knew he wanted to talk. He went inside the room, and he didn’t do his usual pat-my-head or poke-my-side routine. He went past me, as if I was not there. I knew he also waited for me to initiate a conversation, or even any interaction for that matter. But I just couldn’t.. I was still hurt. It was the first time I was hurt with something he said. It’s our first ‘argument’ since forever. I didn’t know what to do.. Day just ended with me and him still not talking, things still unfixed. I just can’t help but feel sad.. my dad is always my ally during anything that involves me and my mom fighting. I would text him late nights and he’ll call just to tell him how I fell. I had always idolized him even though he left us. But now, it feels different. It’s like I have no one who I am sure is on my side.

I love you, dad. I’m sorry for being a brat. It just really hurts me that much..